​Councillor Neil Gwynne was elected Mayor of Romsey Town, in May 2022, for the Mayoral Year 2022-23. With weekly posts, Mayor Neil Gwynne aims to keep you up-to-date with what is happening in our town.
Invite Mayor to your event
14th to 20th June 2022
​The week started with what was not strictly a mayoral event – namely giving a talk to Mottisfont and Dunbridge WI on Wilder Romsey, the community group that I founded last year. However, the part of the talk that generated most audience reaction was when I touched on Romsey Future and how that led to me being a councillor. No party politics – just what the three tiers of local government are (and are not) responsible for, and how that ties in with central government. Sounds as dry as dust! But the members of the WI were very interested – as were the members of the Romsey Men’s Shed when I gave the same talk to them. So if anyone else out there wants a talk on that, and/or Wilder Romsey, and/or the Plaza Theatre…
​On Wednesday I was at a tourism in Test Valley meeting, regularly arranged by Tourism South East and the VIC Manager Julia West, held at the fantastic Houghton Lodge and Gardens (well worth a visit). I’ve gone to these meetings previously (and this time) as Chair of the Plaza Theatre. But, as Romsey Mayor, I asked for invitations to go to the Mayor of Andover (David Coole) and the Chair of Stockbridge Parish Council (Alex Lawrence). Romsey clearly has great attractions for visitors – Romsey itself, the Abbey and Paulton’s to name just a few. But Test Valley is fortunate beyond that. The northern half of the borough has the Army Flying Museum, Hawk Conservancy Trust and Whitchurch Silk Mill – again, to name just a few. And between lies Stockbridge, right at the heart of one of Test Valley’s most significant sources of visitor income – namely the Test and fishing. Promoting Test Valley as a brand benefits all of us in the borough, including Romsey! 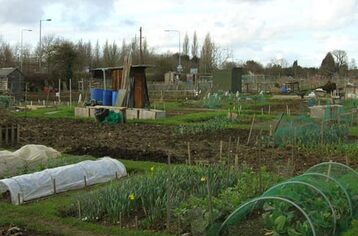 Flag raising ceremony
​The week ended with the raising of the flag for the Armed Forces outside the Former Magistrates Court, attended by myself and the Mayoress of Test Valley Cllr Celia Dowden, together with representatives from the services and British Legion. I have to say that the short service meant more to me this year, given that my stepson has only very recently joined the Royal Navy.
7th to 13th June 2022

When I took on the role of Mayor, one thing I commented on was the strength Romsey’s community, including the huge number of volunteers we have. So I was delighted to go to the volunteer fair in the Town Hall on Tuesday. Most volunteer groups have seen something of a dip in numbers post-Covid, and the fair’s aim was to recruit a few new people.

​Wednesday evening I saw Stroud School’s production of Oliver!, performed at the Dobson Theatre in King Edward VI school. As Chair of the Plaza I would say this wouldn’t I, but it is really important that children get the opportunity to perform in live theatre. It builds confidence and fires off imagination – and this was their first opportunity to do both in three years. All of the cast, and all of the audience, clearly had a great time (especially the pupil whose character gives the teacher playing Mr Bumble a clip round the ear!) A really enjoyable show – well done to all involved. 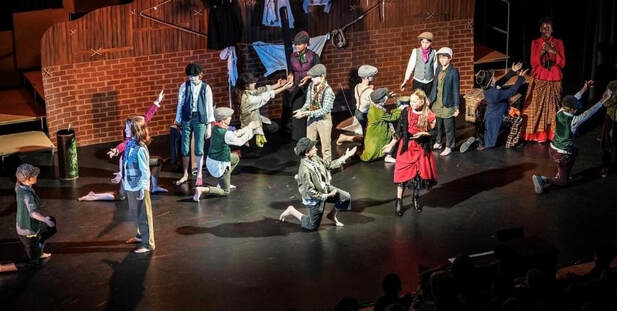 Stroud School production of Oliver!
​There were two events I would like to have attended on Friday 10th – a local business networking event at The Cromwell Arms, and the Good Neighbours AGM. But as I was attending my stepson’s passing out parade from Royal Navy training in Plymouth (I wouldn’t have missed that for the world) I couldn’t be in three places at once! So many thanks to Councillor John Parker and Deputy Town Mayor John Ray respectively, who stood in for me. So if you invite the Mayor to your event, you will get somebody from the council making themselves available - even if I cannot make it.
​
31st May to 6th June 2022
The first day of June saw me planting a tree in the wonderful grounds of Marie Louise House nursing home. Inevitably there was a short shower during the event, but that didn’t dampen spirits. Particularly not the spirits of resident Jean Moody – a long-standing stalwart of the Plaza Theatre. We had an excellent natter about Plaza past and future!

The next day began with a tour of the LTVAS exhibition in the Town Hall. After 50 years in existence – and with around 300 members – the number of publications that this local history group has put together is astonishing (many of them written by prolific historian Phoebe Merrick). Romsey is very well documented thanks to them, and their workshop meetings in the Town Hall basement on Monday mornings and Tuesday evenings, are well worth a visit.
​
The 2nd of June ended with the 111th AGM of the Romsey District Scouts in the Dr Peter Centre. Queen Elizabeth II is the fifth monarch that they have operated under, and they are still going as strong as ever (though if there are any budding scout leaders out there, do get in touch with them)….

And between those two events … Romsey at its absolute finest! The Carnival Committee – and all the local individuals and businesses who sponsored this event – cannot be thanked enough for the street party in The Hundred. There were not hundreds but thousands of Romsonians enjoying themselves in the sun. And a special mention to the man who I will hand over the mayorship to in May next year – John Ray. As Chair of the Carnival Committee he did a great job both before the day, and on the day. Fantastic.
Saturday 4th June included a party in the Abbotswood Community Centre complete with bouncy castle, ukelele orchestra and circus performer. The Trustees and Sue Harvey – the Centre manager – do a fantastic job of making the Centre a vibrant and active focus for Abbotswood. The day continued with a thanksgiving service at the Abbey, in recognition of the Queen’s Platinum Jubilee. It was a lovely service, enhanced by two performances from Romsey Youth Choir. It also led me – as there were six of us there – to google what the collective noun for mayors is. Apparently it is a ‘magnificence’ … hmmm, not sure how I feel about that!
​
And finally on the Sunday – as a cat owner for many years - I was the obvious choice (not!) to judge a ‘best puppy’ competition at the Dogstival event on Broadlands. But I did my best, and I hope those who didn’t win were not too disappointed. The event is certainly an excellent addition to Romsey’s extensive calendar of reasons for visitors to come to our town. This is only the fourth year since Lymington’s Richard and Domine Nowell came up with the idea of Dogstival - but it has already become a large and extremely popular show.
​
24th  - 30th May
Week two of being Mayor began with the official opening of Romsey’s foodbank in Greatbridge Business Park off Budd’s Lane. Speaking personally I feel it is a great shame that a country as wealthy as ours has a need for foodbanks – yet there is no doubt that such a need exists. And the volunteers and helpers there do a fantastic job in what is rapidly becoming – given all of the other means of support that they provide – a distribution centre for help in the town. Shout out to the manager of the foodbank, Jo Topley, who – after six years being key to the success of this place – will shortly be moving on to new challenges. 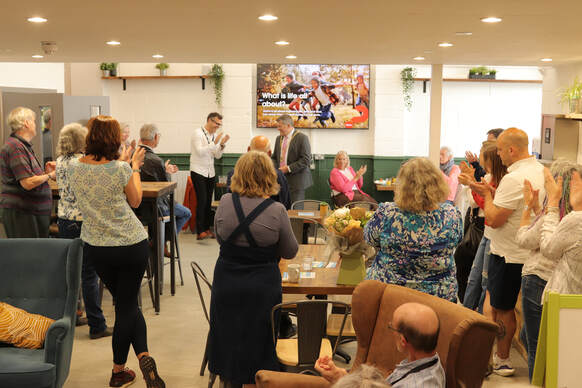 Speaking with the fantastic team at Romsey Foodbank
​Later that same day I chaired my first meeting of Romsey Town Council. Happy to report that all is financially healthy at your Town Hall, with community use of the Town Hall growing – thanks to our Chief Officer (Judith Giles) and her excellent team.

The week continued with a superb production of The Railway Children at the Plaza Theatre. For a town as comparatively small as ours to not only have an entirely volunteer owned and managed theatre (now into its fifth decade) but also one that provides such a high volume and quality of drama, music and comedy – is genuinely exceptional. In the UK we tend to say Am-Dram, but in America they say Community Theatre – and I think that is a more accurate description. The Plaza is having an open day on August 6th (from 10am), so do take the opportunity to go along and see all of the various activities on offer – you might like to take part in one or more of them!

Kathrina and I with some of the cast of the production of The Railway Children at the Plaza.
​
​My week ended as guest of the Revd Mike Perrott at a ‘Songs of Praise’ service in the United Reform Church, this being the first Platinum Jubilee event for me (there will be more next week, which I am very much looking forward to). I took the opportunity to give a reading that said how important it is to get out there and meet people. After the lockdowns and isolation caused by Covid19, that does seem particularly important – and I am delighted to see it happening in our town.
​
17th - 23rd May
​Welcome to the first of 52 (usually) short weekly blogs from me. Some weeks there will be more to say than others, but the aim is to help keep Romsonians aware of things happening in their town. So….

My last day as Deputy Town Mayor was the 17th – and it included a superb lunchtime recital in the Abbey by Ukrainian pianist Ivan Hovorun, which generated the biggest attendance this year for a lunchtime recital (280) who between them raised over £2,700 for the UNICEF Ukraine Appeal. A great result and many thanks to Rotary in Romsey who helped organise the event with the Abbey, and to the generous people of Romsey.

That same day – and the following day – mayor makings came along like London buses. There was my own on the 17th, and that of Cllr Alan Dowden as Test Valley Mayor on the 18th. Both of them very enjoyable events, and both of them highlighting the vast number of voluntary organisations – and individual volunteers – that we collectively rely upon. I was very happy to announce the two charities that I will be raising funds for over the next 12 months – namely Hampshire and Isle of Wight Wildlife Trust, and George’s Trust.
​On the 20th I opened up the Plaza Theatre (with my RAODS member hat on) for an organisation called Green Buttercup, and later that same day was their guest for a celebratory cream tea. Green Buttercup have close ties with Romsey’s Dementia Action Group, and twice a month use the Plaza to provide sessions on arts and crafts as support to carers for those with dementia. It is an excellent organisation and its founder – Pamela Eastwood – does a great job. The cream tea was good too!

​​Finally on the 23rd I officially reopened the refitted White House Hotel – cutting my first ribbon and pulling a pint (not my first!) The Coaching Inn Group and manager Nikita Viljoen have done a fantastic job of the refit – well worth a visit, and confirmation of how healthy Romsey’s high street is. It is also good to welcome to the town a company that has been around for less than 30 years yet is already (very nearly) in the top 20 best companies to work for in the UK. Finally, from a personal point of view, it is great to see the room where RAODS was initially formed (in 1934) getting a new lease of life.
​
That is more than enough for now!